The athlete, or workout girl Julia, as it is known, is a young woman who helped Julia in training for his mission, she has the power to shoot fireballs .

What little is known of the gymnast, is that it is an ally of Dorita, and Julia, she used it to help in the training of Julia, as he threw fireballs, so that it could evade them.It is very likely that she is a gymnast because of the skills and demonstrated skill in training, and also because of their clothing.

The main active power of it, is the fireballs with this power it can project a large concentration of fire in the palm of your hand and throw it in the direction she wants, when she creates a fireball, appears to have full control over it, and you do not need to touch to throw, just the floats, and puts his hand behind to pick a direction to throw at your target.

Also has demonstrated flexibility, awesome, this is because maybe she is a gymnast, is likely to be in the place where they train Julia, she also possesses fighting skills, and his partner who has the power to teleport . 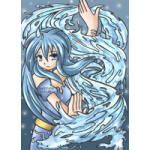